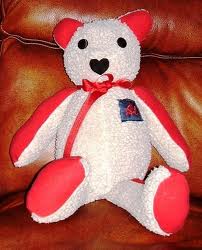 Last week I just happened to be present when a brand new volunteer, Glenna was returning a memory bear she had made. Glenna has been volunteering for about six months now and is doing so because she is unemployed, looking very hard for another job and almost desperately wants to give back. Glenna is quiet, pounded by rejections and extremely talented.

Memory bears, you probably know, are teddy bears sewn from articles of clothing a bereaved person chooses to represent the loved one who died. Bears are fashioned from bowling shirts, uniforms, blouses, event T-shirts, night-clothes and even baby blankets. They are soulful, oozing personality and cherished by the recipient.

Glenna dropped off her freshly done bear and as I admired the pocket she had incorporated from the “Gilly’s Tavern” t-shirt on it, we chatted about the bear she had brought in the week before.

It was a bear from an obviously well-worn  Bait Shop t-shirt. Glenna was telling me how her own father had loved to take her fishing when she was a little girl. He had died when she was only 15 and she wistfully talked about the time she caught a fish and dragged it up onto shore, her father laughing all the while. Glenna wiped a tear, apologizing for “taking up so much time” when the bereavement counselor, Sharon, walked in.

I introduced Glenna to Sharon and Sharon thanked Glenna for making the memory bears. “Our clients just love them,” Sharon said and Glenna nodded.

“Sharon,” I said, “before you have to run, Glenna is the volunteer that made the bear you just gave out, the fishing t-shirt bear.”

“Really?” Sharon’s eyes lighted up. “I gave that bear to his granddaughter and I saw her last night in group and she told us this story. She took her bear home and that night brought it in bed with her. See, her grandfather was the one who raised her after her parents divorced. He loved to go fishing, and although she wasn’t very good or interested in fishing, she would go and watch him and read. Anyway, she had the bear with her and she had a dream. In that dream she and her grandfather were fishing by a big lake and she caught a fish and her grandfather turned to her in the dream and said,’ now see, I knew you could do it’. It was something her grandfather always said to her.”

I could see Glenna’s eyes go wide and her mouth trembled, “that’s something my father always said to me.” She was crying now. (ok, me too). Sharon beamed.

We can tell volunteers how meaningful their work is, but when their ears fill with real stories and examples, now that’s beyond volunteer management. It’s the magic of our job, the moment that we know exists, but we, as managers, well, we know to go looking for it and to stand back and let it happen.

What do our volunteers need? Ahhhhh, many, many things. Sometimes recognition, sometimes socialization, sometimes to be left alone, and sometimes, they need a magic moment. Frankly, we need it too.