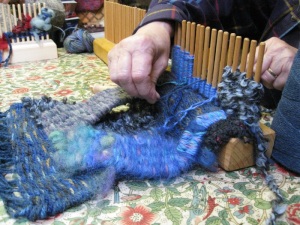 Sometimes I think about the complexities of our jobs and am amazed at the interconnectedness with volunteers, clients, pairings and life stories. I don’t know about you, but I think the universe smiles kindly on what we do. Like the time I was asked to find a volunteer who could speak Armenian and the very next phone call I took was from a volunteer who worked mainly in the office but mentioned that she just returned from visiting her family in Armenia and yes, she spoke Armenian. The Universe clearly heard the request, but more often we spend thorough and thoughtful time assigning volunteers as we weave the fabric of human connection. Some fabric is soft and warm, some rough, more nubby with little pills of emotion. Each is a wondrous creation in its own way.
But we are not creators only, no, we are part of that fabric. Maybe it’s a bit of our blood as we prick our finger with the needle or maybe there’s a strand of our hair that just happened to land ever so slightly into the cloth as it’s woven, but we are in there as well. Because the volunteers and us, well, we are woven together just as surely as they are to our clients.
Sometimes I look at volunteers, feel the deep connection we have and marvel at how they teach and inspire me and how I hope I’ve given them something in return. I think maybe so. I wonder, as I talk to Betty, whose daughter died ten years ago if she imagines as she speaks to me what a conversation with her daughter would be like had she lived. Am I a substitute daughter? No, but maybe her ability to speak freely to me is a rip in time that mirrors what her conversations would have been like had her daughter survived. (Betty, are you telling me the things you would have shared with your daughter? I kinda hope so, because I feel so connected to you right now)
As I listen to Ben speak of his battle with alcoholism I hear the regrets, not in words, but in unspoken pauses. Because we believed in him, Ben has flourished, his soothing demeanor forged from pain. He laughs freely, and to him, life’s fabric is whimsical, full of ducks with sunglasses. Fortunately, our patients can lean heavily on him; he’s borne his share of sorrows. I wonder if our relationship as volunteer and volunteer coordinator has a symbolic meaning, where I represent some of those people he disappointed all those years ago and perhaps our patients represent redemption.
I think of Jolee, who lived with her mother for all of her life and when her mother died, Jolee retreated into a shell. She decided to volunteer and wants to hang around past her appointed time, because as she says, “I just love you guys. I feel so comfortable here.”
But it’s not always us providing for volunteers. I remember a time when my kids were outgrowing me and I acutely felt the tug of parental letting go. It must have been evident, because one of my favorite volunteers, Paul, sat and had coffee with me one day. He Looked at me for a moment and said, “I want to tell you a story.” He told me about his son, Doug, who back in the early 1970’s, was just evolving into a free spirit. Paul, a decorated WWII fighter pilot, could not understand nor get along with his rebellious son. “It became impossible, the relationship between he, myself and his mother,” he remembered, “and so one day Doug got in my car with his knapsack and I drove him to the edge of the freeway near our house and he got out, not knowing exactly where he was going. As I drove away, I looked in my rear view mirror to see him, thumb out, his long hair whipping in the wind. It was the hardest thing I ever did.” Rugged Paul, misty eyed, smiled. “he went to California, later became a financial analyst and we reconnected. But that day, that day was so hard.”
He had no idea how much his story enveloped me in a warm blanket of experience where I felt the okayness of being scared. Neither does Myrna know how much she weaves around me with her wicked jokes when things are stressful. She has been in remission for several years and though her cancer is just a conversation away, she always tries to make sure I’m doing ok. I am when she’s around.
But that’s what fabric does. It blends together so skillfully that only on close inspection can you see the individual threads. I really feel meshed with the volunteers and their lives. And so, in some small way, I feel deeply connected to their work with our patients and families as if a few of my threads add a bit extra depth to their work.
Together, we, volunteers, those we serve and I are a cozy wool, a cool blend of satin or a breezy colorful cotton, These may be fabrics that exist only in a slice of time, but they have a certain beauty, even if just for a moment.
-Meridian

2 thoughts on “The Fabric of Volunteering”