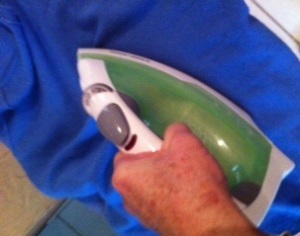 We can’t follow our volunteers around every minute of every assignment. I know for you closet control types, this evokes the anxiety akin to your child’s first day of school. You stand outside the window pressing your nose against the glass trying to will the teacher and other children to be nice, but all you see is your breath clouding the view.

I know this because I’m a control freak too and think that by hovering over the volunteers I can chase away the bad things that will make a volunteer quit. I’m the volunteer parent who peeks in while volunteer Johnny is working just to make sure no creepies are lurking in the corner. Call it a mother hen syndrome, a realistic approach based on history or just plain Volcontrol insanity; I make a living smoothing the creases in the fabric of volunteering. Nuts, huh?
So, of course, when new volunteer Julie, a perfectly capable young woman was going to meet a new patient in a nursing home for the first time, I had to go along. After all, would she be able to find his room? Would the nursing home staff be kind to her? Would she feel thrown to the wolves by my absence?
I agreed to meet Julie one afternoon after lunch. She was actually going to meet this patient, Ezra, and speak to him about writing down his life story. It’s a wonderful way to do a life review and also provide a real legacy for subsequent generations. The activities director of the nursing home, Cara, had mentioned that Ezra enjoyed reminiscing and was a perfect candidate for recording his life.
Anyway, I met Julie in the nursing home lobby and we headed for Ezra’s room. He wasn’t there so we inquired at the nurses’ station and they directed us to the dining room where the residents had just finished their lunch. Ezra was there, in his wheelchair, sitting at a table by himself, sipping his juice. We sat down and introduced ourselves. I sat at Ezra’s left at the square, four person table and Julie sat at his right. I had a clear view of the hallway leading out of the dining room and could watch anyone coming or going. Ezra was absolutely delightful. With an elven smile and self-deprecating attitude, he assured us that his life was not interesting at all, but as we gently prodded, we found out that he had grown up in an orphanage, had taught himself to play the piano and worked in a traveling circus as a teen. His circus job was to help assemble and break down the tents, tend to the animals, learn and do magic tricks and sometimes fill in for one of the clowns. He married at 17, raised three daughters, graduated college at 33 and became a pharmacist and opened his own drugstore. Now, at 87, Ezra was succumbing to disease but his eyes lit up in the memories born of experiences that shaped his autobiography.
While Ezra chuckled through a story about his wife’s overbearing mother, I happen to glance up and see a woman coming down the hallway towards the dining room. She was gracefully tall with dark hair and her casual clothes suggested a visitor. She locked eyes with me, her expression hostile so I looked away for a moment to escape her gaze.
And then it hit me. The daughter claws were out. This was Ezra’s daughter approaching and she needed to know who was sitting down with her father. Tersely she put her hand on her Dad’s shoulder and introduced herself. “I’m Hannah,” she said, reaching for my hand. “And you are?”
I introduced both myself and Julie and explained that we were there to begin a life stories project with her Dad. Hannah sat down and her eyes darted back and forth as she scrutinized us asking her father questions. As Ezra reminisced, Hannah slowly became animated, smiling at the stories. She began to interject, gently prodding her father for clarity and offering her version of events.
We sat and chatted for two and a half hours, much longer than we had originally planned on staying. We could have stayed longer. As Julie and I got up, promising to return, Hannah shook our hands. “Thank you so much for doing this,” she said.
“Your father is a special man,” I said.
“He is. All three of us, my sisters and I were so fortunate to have him as a father.”
Julie assured Hannah that she would return soon to continue recording Ezra’s stories.
As we left, I looked over my shoulder at Hannah, who was hugging her father and smiling broadly.
Julie and I said goodbye in the parking lot. I thanked her and she thanked me for the opportunity. It always gives me a thrill when volunteers are grateful for the very jobs they do so well.

While I tag along and look over the shoulders of volunteers to prevent made up disasters, I secretly really want to experience what they experience. It’s soul filling for me, and when you get to see a daughter animatedly tell you how much your time spent with her special father means to her, it gives you all the reason needed to do your job.
With that kind of reinforcing experience, I’ll hover anytime.
-Meridian

3 thoughts on “What’s Over Our Volunteers’ Shoulders?”